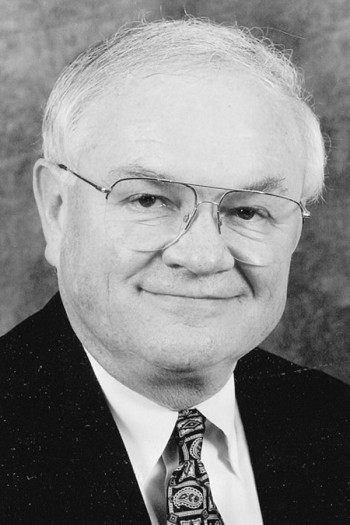 Dr. Del Brinkman retired in the spring of 2002 after a career of 48 years in journalism and university teaching and administration.

Dr. Brinkman was on the faculty of the University of Kansas for 23 years starting in 1970 and served as dean of the William Allen White School of Journalism for 11 years and as vice chancellor for academic affairs for seven years.  While at the University of Kansas, he served as faculty representative to the Big Eight Conference and the National Collegiate Athletic Association for 15 years.  He twice served as chairman of the Big Eight conference and was chair of the search committee when Carl James was hired as commissioner of the conference.  He also served on search committees at Kansas, including the committee that recommended Roy Williams to be the head basketball coach.  He left Kansas in 1993 and served seven years with the Knight Foundation before finishing his career at the University of Colorado.

Among his national activities, Dr. Brinkman for 15 years was a member of the advisory committee of the Knight International Press Fellowship Program sponsored by the International Center for Journalists in Washington, D. C., and served for six years as a public member of the American Bar Association’s Council on the Accreditation of Law Schools and Admissions to the Bar which is based in Chicago.  He recently served several years as a judge of the annual Scripps Howard Foundation Awards Program and previously served as chair of the steering committee for the Association of Schools of Journalism and Mass Communication Leadership Institute for new deans and directors of journalism programs.

Dr. Brinkman continues as a member of the Association for Education in Journalism and Mass Communication and in the alumni associations of Indiana University, the University of Kansas and Emporia State University.  He received the Distinguished Alumni Service Award in 1986 from Indiana University and also has been named a distinguished alumnus of Emporia State University.  He currently is serving the second year of a two-year term as chair of the Distinguished Alumni Service Award Club at Indiana University.  He continues an active interest in journalism and mass communication research and activities involving William Allen White and serves on the William Allen White Historic Home Preservation Committee in Emporia.  He also continues as a consultant and as a member of national university accreditation teams.  In the past several years, he has served on the Northwest Commission of Higher Education accrediting teams at the University of Oregon and at the University of Nevada-Reno. 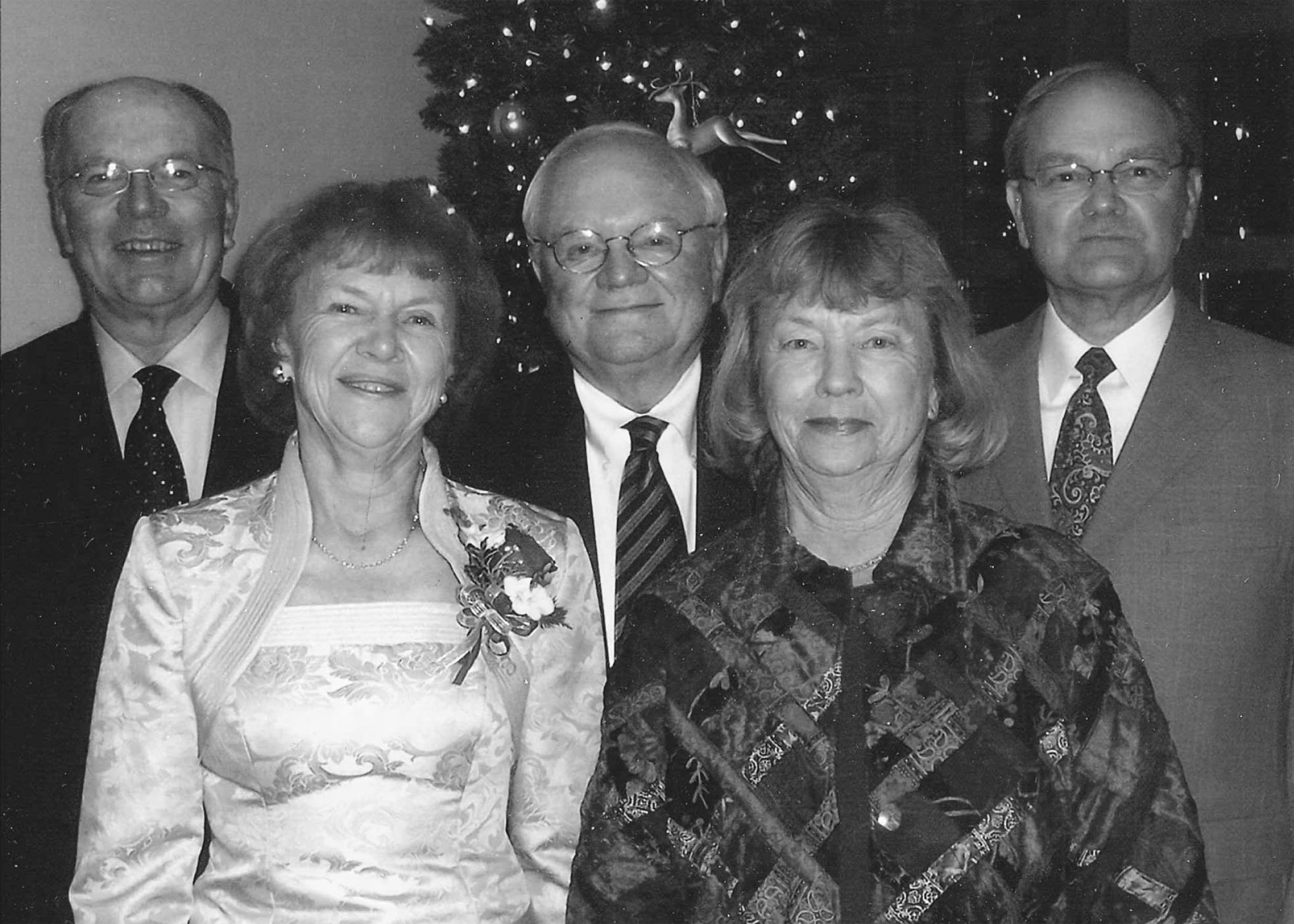 Del Brinkman (back row, center) is shown with his brothers and sisters: front row, Rosalie and Barbara; and back row, Ron and Marvin. 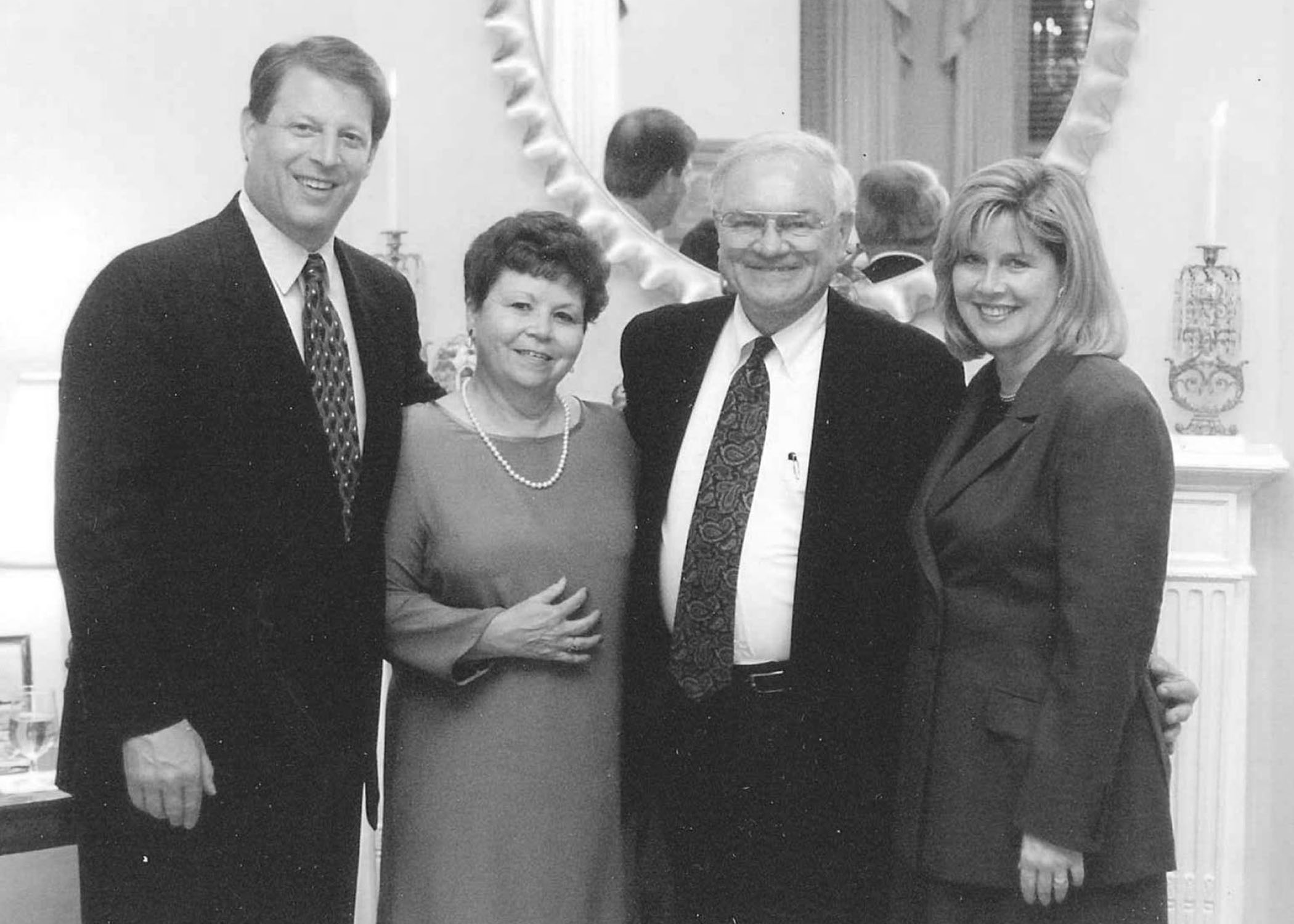 Del and Carolyn Brinkman (center) with Al and Tipper Gore.