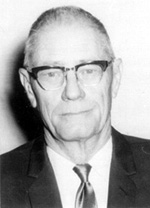 Floyd Cooley was born July 2, 1904, near Bazine. He and his wife Ora operated newspapers at Otis and Bison before he became managing editor of the Ness County News in 1942.

According to an article published in the News after Cooley’s death, “Floyd did not seek the limelight. Instead he worked quietly behind the scenes to accomplish much good for his community.

“He was a kind and gentle man whose counsel was sought by newspaper people and others for his clear thinking and guidance. He was respected by everyone who knew him.”