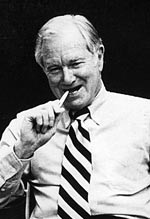 Peter McIntyre Macdonald was born in 1916 in Glasgow, Scotland. He attended the Faculty of Actuaries in Edinburgh and was a Squadron Leader in the Royal Air Force before coming to the United States in 1945 to attend the University of Kansas School of Business.

In 1947, he accepted a job as promotions manager for KSAL in Salina. Two years later, he became an advertising salesman for the Salina Journal. Macdonald worked his way up in the newspaper business, becoming general manager of the Hutchinson News in 1956, and editor and publisher of the News in 1962. It was under Macdonald’s leadership that the News earned the Pulitzer Medal for Public Service in 1965.

Macdonald was named vice president and general manager of Harris Group in 1965; president in 1966 and chairman in 1978. Macdonald also taught as a visiting professor in KU’s School of Journalism.

He was active in the newspaper industry on both a state and national level. He served as president of Inland Daily Press Association in 1969; was the first chairman of the UPI Advisory Board from 1974-1978; was a director for the American Press Institute from 1977-1984; and was a trustee for the William Allen White Foundation. He earned the Minnesota Award for Distinguished Service to Journalism in 1976, and the First Legacy Distinguished Service Award from the William Allen White School of Journalism in 1995.

Macdonald was equally as active in his community. He was a director of Dillon Companies Inc. from 1967-1983; a director of the First National Bank in Hutchinson from 1969-2000; a member of the KU School of Business Advisory Board since its inception; and an elder and substitute preacher in the Presbyterian Church. Macdonald received the HCC Black American Recognition Award in 1989 and the Outstanding Humanitarian Award from the National Society of Fundraising Executives in 1996.