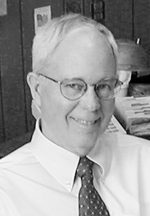 Frederick D. "Dave" Seaton, served as editor and publisher of the Winfield Daily Courier for 29 years, from 1981 to 2009. He retired from that position last year, but remains as chairman of the board of Winfield Publishing Co. and is still actively involved in the business that he owns.

Seaton is a graduate of Field Kindley High School in Coffeyville, Kan., Harvard University and the Columbia University School of International Affairs.

David and his wife, Callie, served for two years in the Peace Corps in Brazil. Following that, David was press secretary and legislative aide to U.S. Sen. James B. Pearson of Kansas. In 1978, the Seaton family moved to Winfield, and Dave went to work for Winfield Publishing Co., part of the Seaton Newspaper Group, which has seen four generations of family members operate newspapers in Kansas.

As editorialist for the Courier, Seaton has used Courier editorials and his weekly column to support public education, citizenship, racial and religious tolerance, campaign finance reform, historic preservation and moderation in the Republican Party of Kansas and nationally.

He has won several awards for his editorials and for his personal column, “A Little Extra,” which has earned three first-place honors in the Kansas Press Association’s “better newspaper” contest.

Seaton served as president of the Kansas Press Association in 1991 and the Winfield Area Chamber of Commerce in the 1983/84 year. He is a member of the America Society of Newspaper Editors.

Taking a strong stance on issues of the day, and dedication to community involvement, have been hallmarks of Seaton’s newspaper leadership. His long list of associations and activities include: the first chairman of the Winfield Main Street Program, and chair of a statewide advisory committee on the Main Street Program; chairman of the Winfield Chamber’s transportation and legislative committees; and member of the state highway task force that recommended major statewide improvements in 1987.

His interest in services for the mentally disabled led to his appointment in 1988 as chairman of the Governor’s Mental Health Services Planning Council. That group developed the consensus among interested parties that allowed the Kansas Legislature to pass Mental Health Reform in 1990.

Seaton served on the board of directors of Grace House, a local pre-vocational center for the long-term mentally ill, for several years. He is a member of the Winfield Rotary Club and former board member of Creative Community Living, a residential program for the developmentally disabled, established after the Winfield State Hospital and Training Center closed. He is also a former trustee of KPTS-TV and a former member of the the Kansas Humanities Commission. Seaton has been a member of the Martin Luther King Jr. Task Force and Celebrate Winfield History.

Seaton and his wife, Callie, a painter, have three children, Liz, 43, of Alma, Kan., Rebekah, 40, of San Rafael, Calif., and David Allen, 39, of Arkansas City. They have seven grandchildren.