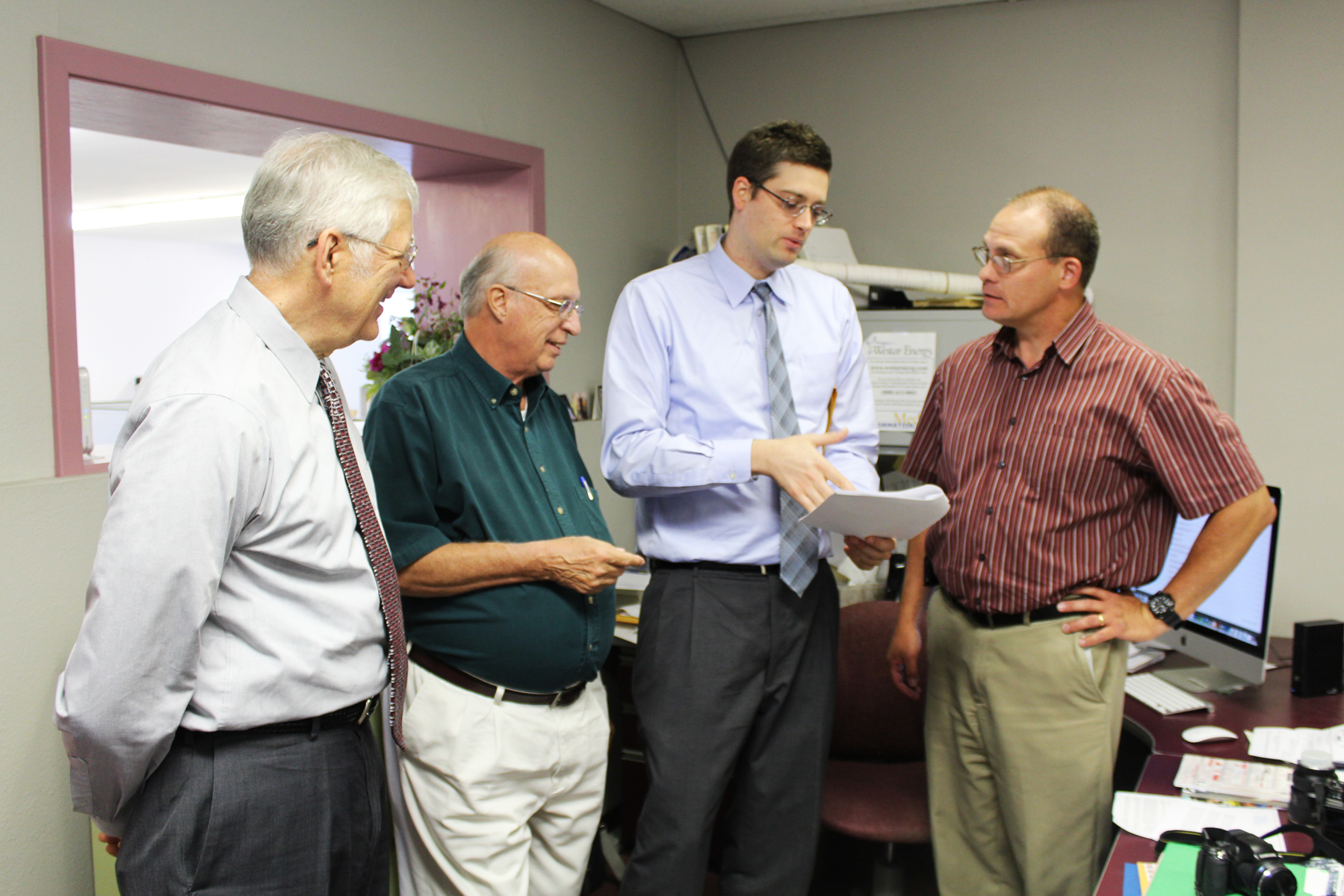 Lawrence attorney Max Kautsch, third from left, discusses an order he had prepared for a court hearing Wednesday concerning sealed court records in a Parsons case with Ray Nolting, managing editor of the Parsons Sun, right. Looking on are Mike Kautsch, a professor of law at the University of Kansas, and Ron Keefover, president of the Kansas Sunshine Coalition for Open Government.

PARSONS — A Labette County district judge Wednesday unsealed documents in a Parsons quadruple murder case, and revealed for the first time that 26 search warrants had been issued in its investigation.

District Judge Robert Fleming ordered the disclosure of most of the pleadings in a capital murder case against David Cornell Bennett Jr., Cherryvale, who is charged in the November 2013 murders of a Parsons woman and her three children, ages 9, 6, and 4. The cause of their deaths, however, has not been released more than eight months after the victim’s bodies were found in their Parsons residence.

Fleming Wednesday signed an order unsealing the records in a court proceeding brought on behalf  of local news media to lift the judge’s prior order giving attorneys permission to filed all documents in the case under seal. Wednesday’s order unsealing the records followed a hearing on the news media motion that was conducted in Parsons July 25. Then, and again Wednesday, the judge said his earlier order sealing the documents did not comply with Kansas Supreme Court decisions that date from 1981.

The 1981 Supreme Court decision in Kansas City Star v. Fossey created a procedure that would seal records only on the basis of “clear and convincing evidence” that confidentiality was necessary to ensure a fair trial and that alternatives to sealing the records were unavailable.

Lawrence attorney Maxwell Kautsch represented the plaintiffs in the case — the Parsons Sun, Montgomery County Chronicle and TV station KOAM in Pittsburg. Kautsch had successfully argued in July that in the Fossey decision, the Kansas Supreme Court adopted the American Bar Association’s Fair Trial and Free Press Standard 8-3.2 and held the standard would “govern the closure issues in future cases.”

Kautsch’s brief argued that under that standard, a trial court may close a preliminary hearing, bail hearing or any other pretrial hearing, including a motion to suppress, and may seal a record only if:

• The dissemination of information would create a clear and present danger to the fairness of the trial;
• The prejudicial effect cannot be avoided by reasonable alternative means, which include continuance, severance, change of venue, change of venire, intensive voir dire, additional preemptory challenges, sequestration of the jury and admonitory instructions to the jury.

The Fossey decision also made clear a decision to close proceedings or seal records requires a hearing.

In a related matter, however, Fleming denied the plaintiffs’ request to also open the probable cause affidavits in support of search and arrest warrants in the same case, agreeing with attorneys for the state and the defense that release of that information now — with the preliminary hearing just three months away — might cause harm to both. Fleming said while he understood the public’s right to know, he believed he also had an obligation to balance that against the defendant’s right to a fair trial.

Both the prosecution and the defense argued for keeping the probable cause affidavit secret until the preliminary hearing in October, almost 11 months following Bennett’s arrest. They said to do otherwise would compromise his chance for a fair trial. They asserted that pretrial publicity based on the contents of the affidavits could possibly taint the jury pool and also violate their obligations as attorneys not to discuss certain information to trial.

Kautsch argued that releasing the affidavit now actually would be fairer to the defendant because it would allow more time for its contents to fade from the public’s memory than if the information came out in October at the preliminary hearing.

“We argued during the legislative hearings on this issue that we understood certain redactions would take place, such as medical records, Social Security numbers, the names of undercover agents and informants and the like,” said Doug Anstaett, executive director of the Kansas Press Association. “However, while we realize this case couldn’t be decided on the new affidavit requirements, we hoped the judge would acknowledge the Kansas Legislature’s strong message that these records should be open to the public and rule in our favor.”