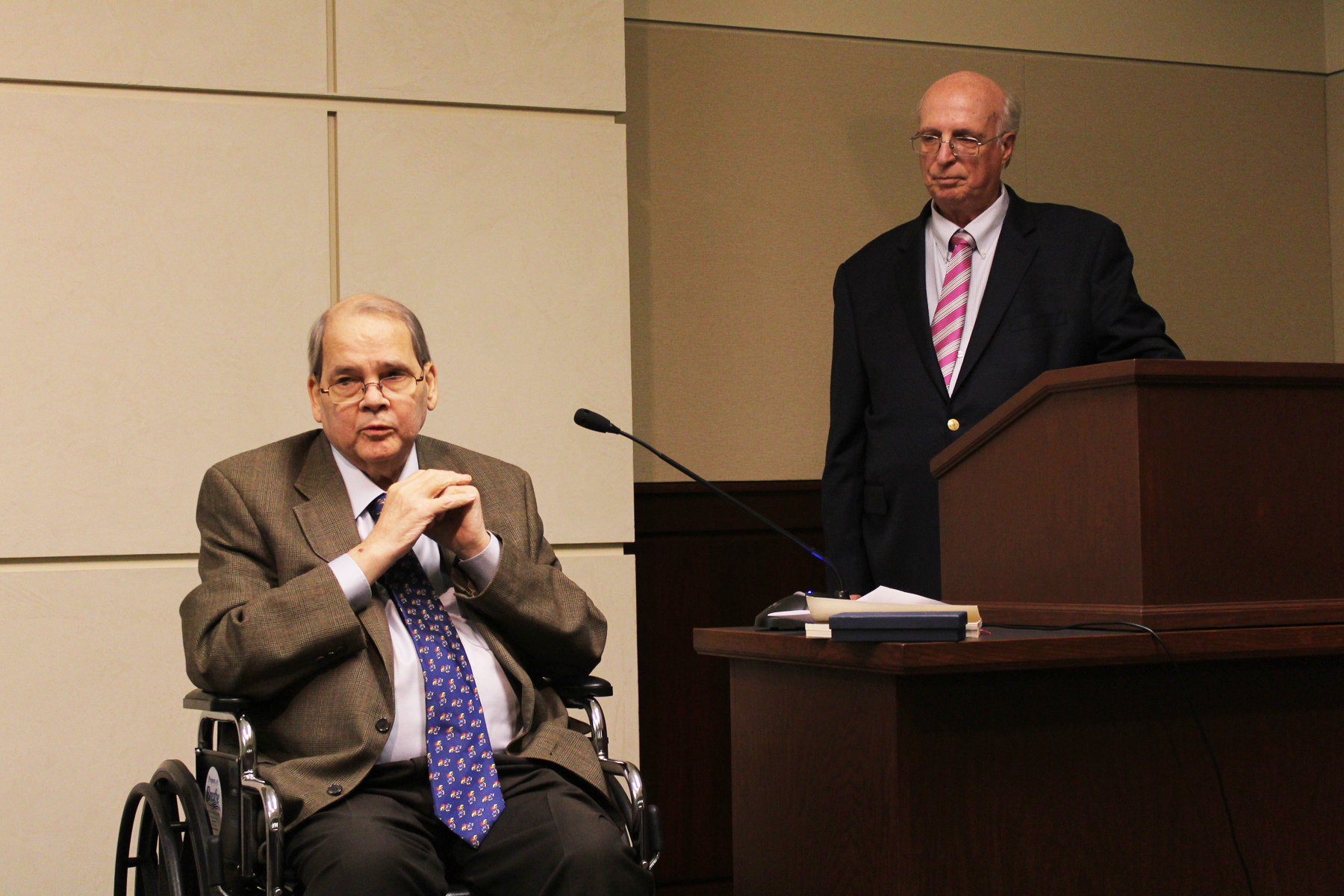 The Kansas Sunshine Coalition for Open Government has named Topeka media law attorney Michael L. Merriam as recipient of the Coalition’s “Above and Beyond Award” for Merriam’s career-long contributions to promoting and defending open government.

The award was presented Nov. 21 in the auditorium on the first floor of the Statehouse.

Ron Keefover, Coalition president, said the Sunshine Coalition Board of Directors voted unanimously to bestow the 2014 award to Merriam based on his 35-plus years of innumerable presentations, consultations, lobbying, and other outreach efforts designed to open government records and meetings, many of which were done at no charge on behalf members of the Coalition and media outlets that had been denied access to government in Kansas.

Sunshine Coalition board members, including Doug Anstaett, executive director of the Kansas Press Assn., and Kent Cornish, president of the Kansas Assn. of Broadcasters, are among officials who will preside at Friday’s brief awards ceremony.

“Said simply, Mike Merriam has been one of the newspaper and broadcast industry’s greatest and most consistent champions these past three decades, never accepting less than total compliance with the open records and open meetings laws of Kansas,” Keefover said.During the years, Merriam has among other endeavors:

• Successfully pursued the opening of massive records held by the Schools for Fair Funding, a statewide organization of school districts that sued the State of Kansas for additional school finance;

• Operated a legal hotline telephone call-in program for more than 25 years for those inquiring about access to government records and meetings;

• Teamed up with the University of Kansas Professor Mike Kautsch to provide the “Mike and Mike Show,” a primer on open government, which has been presented dozens of times to local government officials around the State of Kansas and has spoken at many media law seminars presented in Kansas and at national programs on the open government and the First Amendment, including annual regional seminars on the Kansas Open Records and the Kansas Open Meetings Acts.

Merriam is a fifth generation native of Topeka, where he received his Juris Doctor degree from Washburn University after receiving a B.A. from the University of Kansas.  He is admitted to practice law in the courts of Kansas, the Tenth Circuit Court of Appeals, the United States Supreme Court, and in many other jurisdictions whenever necessary.  He is currently in private practice in Topeka.

He has practiced extensively in media law and First Amendment representation for over 35 years, and represents many communications companies, individual newspapers, broadcasters, and membership organizations including the Kansas Press Association, the Kansas Association of Broadcasters, and the Associated Press, and has created and maintained telephone hotlines for journalists for many years.  He has authored many materials for publication on this subject, and has been an Adjunct Professor teaching Mass Media Law at Washburn University.  For his work in media law he has been recognized as a Best Lawyer in America biannually since 1991.

The Sunshine Coalition for Open Government is a statewide organization of journalism and law professors, members of the news media and other private citizens committed to promoting open government in Kansas. Its Board members include the Executive Directors of the Kansas Press Association, Kansas Association of Broadcasters and representatives of the Society of Professional Journalists and the Kansas League of Women Voters, among others. It is housed at the Elliott School of Mass Communication at Wichita State University, where the Coalition was founded in 2000.

To read a story about the award presentation by Capital-Journal reporter Jonathan Shorman, go here. http://cjonline.com/news/2014-11-21/sunshine-coalition-honors-topeka-med...