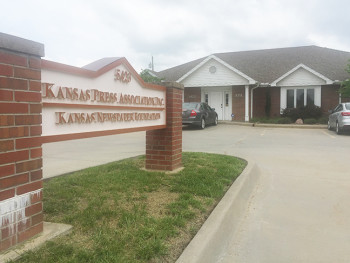 Yielding to the reality that the industry has changed radically over the past two decades, the Kansas Press Association Board of Directors has sold its building in Topeka.

“Certainly, our building was worth much more at one time, but real estate professionals told us the COVID-19 grip on the economy would likely continue for years, especially in the commercial real estate market,” Bradbury said.

In addition, several businesses including the Ramada Inn, a large nursing home and others had recently vacated the immediate area.

The building was put on the market before the former KPA executive director, Doug Anstaett, left in July 2018, but interest had been minimal at best since that time.

“Property taxes alone on the building were more than $16,000 a year, and fixed expenses ran nearly $40,000 a year,” Anstaett said. “We could not adsorb those costs because, like our newspapers, KPA’s revenue had dropped significantly in recent years. When I came to KPA in 2004, we had nine full-time employees. We’re down to four plus two part-timers.”

The sale is really a reflection of what’s happened to the industry, Bradbury said. Four of our state’s largest newspapers — the Kansas City Star, Wichita Eagle, Topeka Capital-Journal and Lawrence Journal-World — sold their buildings in the past few years and moved to smaller spaces. The last three of those also shut down their presses, moving their printing to the Star.

“For now, at least, the KPA staff will work remotely and meet at least weekly in Topeka. We pledge to keep our service to our members as our No. 1 priority,” Bradbury said.

The association didn’t have its own building in its early years. It’s first “field secretary,” O.W. Little, worked for the association mostly out of his office at his newspaper, the Alma Enterprise.

The association’s first home was shared space in the basement of the Kansas Chamber of Commerce building in the early 1940s, according to Tom Eblen’s Kansas Press Association history book.

It remained there for four decades before a building committee was appointed in January 1983 to look for new quarters.

A few attempts to buy space in the downtown area never materialized.

One site the KPA board strongly considered was at 117 W. 10th, just south and east of the Kansas State Capitol.

At a meeting in October 1983, the KPA board authorized the purchase of that property, but an appraisal of the space revealed it was worth significantly less than the asking price, so the offer was rescinded.

That area of the 100 block of Southwest 10th has been cleared since then and now houses the Curtis State Office Building.

The board decided to sign a new three-year lease at the Jackson location, but remained interested in pursuing a new location.

After David Furnas became executive director of the association in 1984, the search continued.

In February of 1987, KPA broke ground on property at 5423 W. 7th and moved in the following September.