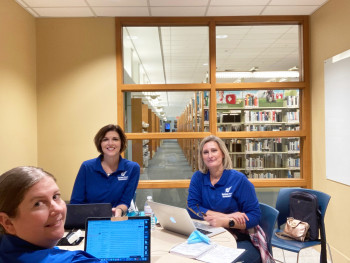 It’s been about 20 months since the Kansas Press Association sold its headquarters in Topeka and instituted a work-from-home operation.

“It has been an amazing transition,” said Emily Bradbury, KPA executive director. “Of course, there have been issues, but I think the staff has responded well to the new challenges. We’re pleased with where we are today.”

When the pandemic first hit and work from home became common across the United States, the association had already begun to look into selling the building at 5423 S.W. 7th St. in west Topeka. Staff had identified at least $35,000 in savings on everything from property taxes and utilities to maintenance of the building.

One of the chief advantages came in staff savings on office expenses and time commuting to Topeka because three of the five staff members live elsewhere (Bradbury in Wellsville, Lori Jackson in Lawrence and Amber Jackson in Silver Lake).

“As much of we loved that building, it was eating us alive in expenses we simply couldn’t avoid,” Bradbury said. “We’ve been able to pivot those former expenses to more training opportunities to serve our membership. Amber is able to make her sales calls by telephone or in person just as well as she did before.

“When members call our number, it automatically rings on Lori’s cell phone in Lawrence. If she’s on the phone, it forwards to Amber, Judy or me. We also can transfer to whomever the caller wants to talk to, just as if we were all in the same location.”

“That shows me the transition has been relatively seamless,” she said.

However, it hasn’t been without its challenges.

“One of the biggest issues we have faced since pivoting to remote work is burnout,” she said. “Our staff was working more not less. So we had to work through how to create a boundary between work life and home life, how to ‘close the office door’ at 5 p.m. and how to balance the new work environment with pandemic pressures.

“We still aren’t perfect at it but we have always liked to err on the side of too much work than not enough, obviously.”

Current KPA Board President Robin Wunderlich said, “There have been ups and downs through the transition, but what transition doesn’t? We are blessed with a great staff that continues to face challenges head on.

“It is evident to the board that they work together as a cohesive team to ensure our newspapers benefit from their efforts. Their offices might not be in the same location, but their focus is ... to serve Kansas newspapers.”

Bradbury believes KPA was one of the first association to sell their building and go to telecommuting; however, since then, another five have sold in the past 18 months.

“We’ve been asked by several associations how it has worked,” she said, so we’re learning from each other.

National research by Upwork estimates that one in four Americans, over 26 percent of the American workforce, was working remotely in 2021.

Upwork estimates the trend will continue and that by 2025, 22 percent of the workforce (36.2 million Americans will still be working remotely.

Another survey by Becker Friedman Institute for Economics at the University of Chicago found that remote workers believed  they were just as productive working from home compared to working in the office.